Born in Trento (Italy) in 1989. Lives and works in Marseille
Graduated in sculpture at the Academy of Fine Arts of Bologna and Marseille.
His often contextual and collaborative interventions highlight the relationships between humans and the environment.

Exhibition at the Festival of Art/Terre, with the artwork "Couches de mémoire terrestre" in Comines-Warneton, Belgium, from 15 to 28 September 2014

Exhibition at the Festival des Arts Ephemeres in the Park of Maison Blanche, Marseille, from 22 Mai to 7 June 2014

Permanent exhibition for the itinerary of Ledro Land Art, with the artwork "I volti nella terra", Ledro from 30 July 2013

Exhibition "The game of mirrors" at the Andromeda Art Studio Trento, March 2007

From September 2008 to March 2012: Academy of Fine Arts of Bologna Afam - Degree in Sculpture

From September 2003 to June 2008: Art Institute of Trento Alessandro Vittoria - Diploma of Art

In March 2018 - Realization of a journey in the nature of relational art with a class of students «L’école buissonnière», «Entrée des artistes» FRAC PACA, Collège Marie Marvingt, Tallard

In July-August 2015 - Teaching arts education in the Center of art  Amusons nous, Suzhou ( China) With children from 4-10 years old

In June, May 2014 - Realization of the ceramic part of Graham Fagen's installation for the exhibition at  Friche de la Belle de Mai of Marseille 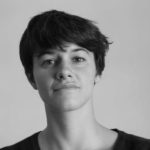