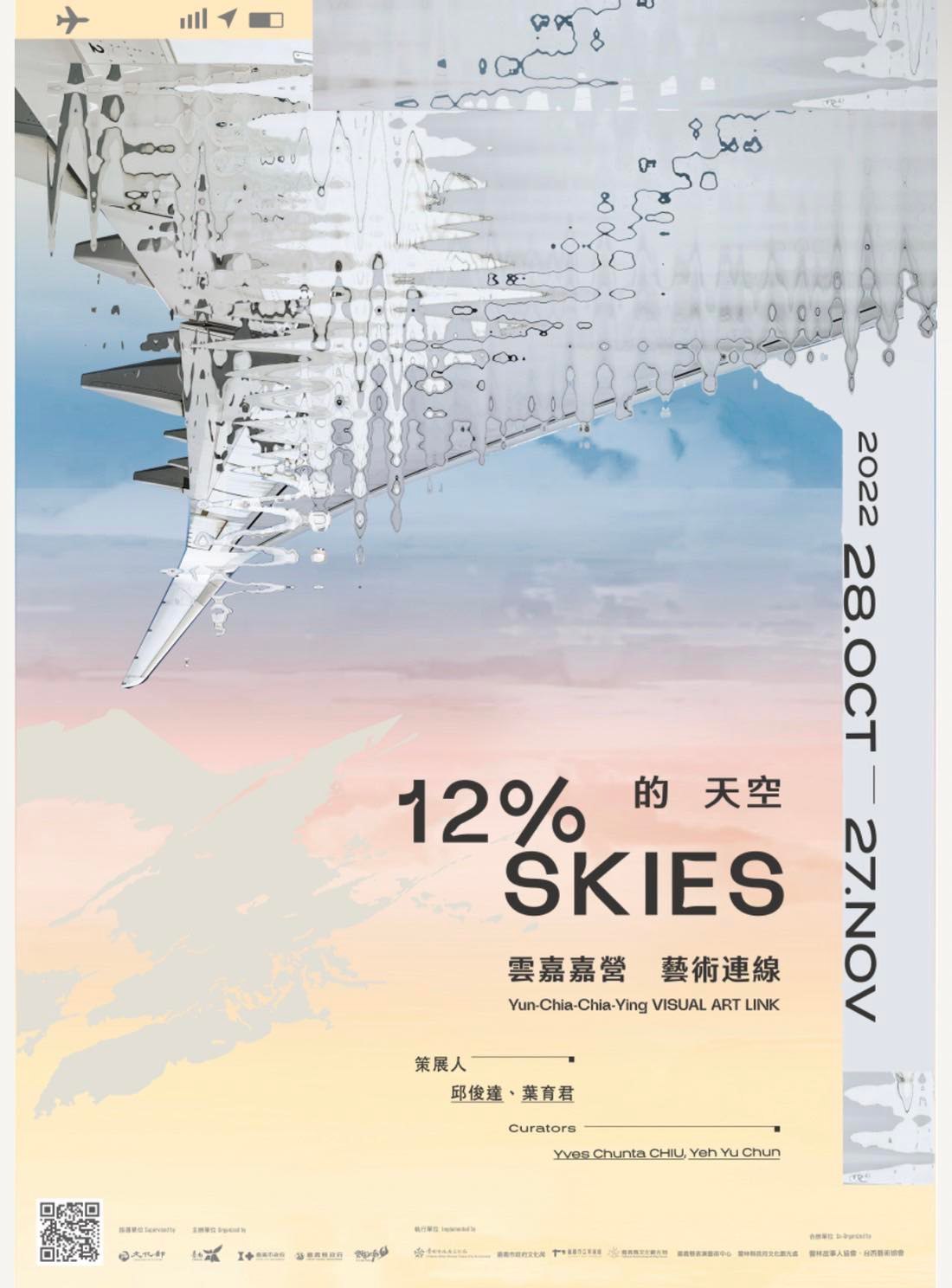 It is with great pleasure that from 28 October to 27 November the Smogglobes will be visible at 12% SKIES, a collective exhibition of the Xinying Cultural Center of Tainan in Taiwan.

"Mobility" is not only a way to navigate, but also a way to recognize the sensory structure of things and environments, the state of being of individuals and groups, and a lived relation and way to understand the world in the midst of participation.

The sky leaves no trace of wings, but I have flown. --Rabindranath Tagore

In 2016, Yunlin County, Chiayi County, Chiayi City, and Tainan City formed the "Yun-Chia-Chiia-Ying Theater Link" and jointly launched the "Summer Theater Festival", which has become the largest and only cross-regional performing arts festival in Taiwan; in 2020, the four counties and cities further jointly planned the "Yun-Chia-Chiia-Ying Visual Arts Link" and introduced the curator Yves Chunta Chiu in the following year. This year, Visual Art Link adopts a dual curators, with Qiu Yves Chiu and Ye Yujun continuing the 100-year time frame of the plains and proposing "12% Skies", to demonstrate a vast imagination from the perspective of the sky and flight.

"12% Skies" intends to start from a basic but ambiguous geographical fact to illustrate the core spirit of art link in "breaking away from the frame" and "exploring the unknown". When we put this "approximate" value into the imagery of the boundless sky, we want to present a kind of thinking that focuses on "mobility" but not "boundary", and the encounter and cohesion in the soaring.

The sky evokes flight, freedom, anticipation, but also death and uncertainty. Without wings, human beings can only entrust themselves to various flying machines and begin a daydream of indulgence in excitement and fear, with each ascent and landing a joyful and sad return to reality. Flying is a temporary and exceptional moment. In the familiar and unfamiliar scale, we see the change of relationships; in the boundless distance, we see all kinds of new imaginations.

Continuing the three paths developed in "Mobile Village", and using "mobility" as a connotation to dissolve "borders" and to draw diversity into encounter, assembly and participation, "12% Skies" draws from the beautiful, brutal and philosophical flight narrative in Po-Lin Chi's "Beyond Beauty - TAIWAN FROM ABOVE" and the fantasy experience of French literary scholar Antoine de Saint-Exupéry's "Night Flight”, to propose three subthemes "Plain/Ocean Flight," "Solar Term Spectrum," and "The Embedded Body (puânn-nuá)," a total of 27 artists are invited to present the flight paths, stories, and lives woven by flight as an alternative form of movement through art exhibitions, co-creation workshops, and performance shows.

The double meaning of the pronunciation "pêⁿ-iû", a Taiwanese pronunciation of "plain", evokes an imaginary overlap between land and sea when we repeatedly pronounce "Chia Nan Ping Yang". From the perspective of "flight", the plain indeed looks like an ocean, with the rice fields transformed into golden waves amidst the air currents and fog, while the forest looks like a floating island inhabited by a variety of creatures. While flying, the familiar everyday scenery becomes unfamiliar, and the lackluster local memories become new stories.

Rainfall, a strange landscape in the summertime on the Chia Nan Plain, attracts many people who try to catch the clouds and make up for the rain. This fleeting afternoon thunderstorm occurs mainly in the afternoons when heat convection is strong, and the weather changes at different times of the year, not only affecting the various industries that watch the sky for food, but also bringing a unique color, atmosphere and taste to a place due to the wet and cold. "How's the weather today?" is both a greeting of concern for the place and an interaction of a spectrum of colors depicting production, labor, and memory.

Embedded (puânn-nuá): social interaction. It means people interacting with each other. In the city, in the field, in the field, we need to physically embed ourselves, symbolizing the dialogue between people, things and objects, using the body as a medium, we focus on how people meet, how they connect to places, how they relate to places. Embedded in the body.

In contrast to the last year, which focused on local history, spirituality and digital culture, "12% Skies" tends to use various actions to illustrate how these skies are connected, layered or drifted apart, as the Indian poet Rabindranath Tagore said: "The sky leaves no trace of wings, but I have flown.” In this way, he articulates a view of life that has been experienced, happened, and continues to move forward, without relying on evidence to give value to this process. In this way, the traces are not just proof of "having walked" but a poetic articulation of "change" and "possibility. "12% Skies” is thus about the practice of processes: walking, riding, and flying in daydreams, the sky is an infinitely spreading blue, and the journey is an endless change of life and place.